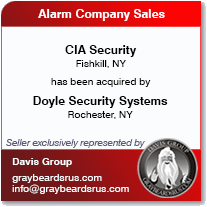 February 26, 2019, Long Grove, IL — Commercial Instruments & Alarm Systems (CIA Security) of Fishkill, NY, has been acquired by Doyle Security Systems, Inc., headquartered in Rochester, NY. The acquisition has been reported to be the largest merger in the 100-year history of Doyle Security, and will result in 7,500 new customers for the company.

"I'm extremely happy that we were able to find a solid buyer with a great reputation," stated John Lombardi, founder and owner of CIA Security. "It means a great deal for our customers and our employees to continue with a reliable and well-grounded security provider." Lombardi will assist throughout the transition and in a regional leadership role going forward.

CIA Security was established in 1979 by President and Founder, John Lombardi. Now with a staff of over 50, CIA security has built its reputation in the Hudson Valley by developing and providing cost-effective, reliable, and trouble-free integrated solutions. The Company owns and operates its our own, on-site UL-Listed Monitoring Response Center at its Fishkill headquarters.

DMAG, aka the "Graybeards," assists in the sale of alarm and integration companies throughout North America. Principals of the Company are widely known and respected throughout the industries based in large part on nearly four decades of participation as Mergers & Acquistions negotiators, keynote speakers and presenters at industry seminars, tradeshows and association events.