In a deviation from previous talks, Ron focused on trends that were impacting independent alarm dealers as they contemplate various strategies. The talk gave members, whether they were interested in buying, selling or remaining just the way they were, how they could plan for the future and what strategies would be taken.

Davis was given recognition for his work with the association and thanked for his contributions with a plaque presented by association president, Mike Horgan. 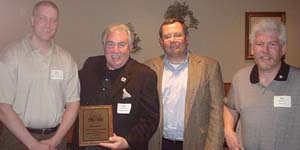 Ron Davis pictured receiving an award from the Wisconsin Burglar and Fire Alarm Association President, Mike Horgan (left). Mike said of the Davis presentation, "We are honored to have somebody of Ron Davis' status speaking at our convention."