How to 'Pay it Forward' and Reap Big Returns 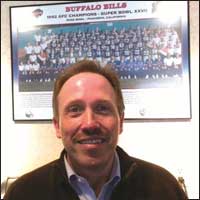 Idea of the Month

If you had just one really great idea you could share with the alarm industry, what would it be?

“Always do the right thing. In doing so you build up relationships, many of which last a lifetime.”

John Sperrazza has an especially insightful business and life concept to contribute to our industry this month. Before I share it with you, a little background is in order. This past summer I was fortunate enough to be the guest speaker at the New York Burglar and Fire Alarm Association's (NYBFAA) annual conference, held at Turning Stone Resort & Casino in Verona, N.Y. In short: great group, great meeting.

I had the chance to meet and speak for the first time with Sperrazza who is president of NYBFAA and Buffalo-based Advanced Alarm Inc. When I inquired about Advanced Alarm he mentioned it provides much of the security for the NFL’s Buffalo Bills. That led to me mentioning my 16-year-old grandson’s desire to pursue a career in sports management. Before I knew it, I was making reservations to travel to Buffalo, with my grandson, for a weekend’s “total exposure to the Buffalo Bills experience” as seen through the eyes of Sperrazza. What a weekend it turned out to be! My grandson, Ben, met with top executives in the Bills’ organization, toured the team’s facilities and we both watched a game as guests at the Bills’ own skybox.

With Sperrazza along during the weekend, you can be sure I took the opportunity to ask the question that elicited his response for this month’s column. His reply literally stunned me because in my office is a picture of my mentor, Lloyd Conant, founder of the motivational and business development program, Nightingale-Conant. Frankly, whenever I have a tough decision to make I look at Conant’s picture and ask myself what he would do. Conant’s response continually pops into my mind, “Always do the right thing.”

During the time Ben and I were with Sperrazza, I asked how the relationship had developed to the point where he could call the No. 2 man in the Bills’ organization and set up an interview for my grandson that lasted for more than an hour. He laid it out plain: “We had an opportunity to do some security work for the organization. We went out of our way to do the right thing and were rewarded with increasingly more business. Now we’re one of the major security suppliers to the team. We’ve become business friends. It’s all because the guiding philosophy in business is to always do the right thing.”

Throughout my time in New York while preparing for my appearance and attending the association’s conference, I never heard anything but praise and positive comments about the way Sperrazza not only runs the association, but Advanced Alarm as well. Sperrazza was seemingly surprised at my outspoken admiration for what he has accomplished. In fact, at one point he asked, “Why are you so surprised?” It may be a little difficult to fully appreciate, but in 45 years of working in this industry I can count on the fingers of both hands the number of companies that have been run with the exclusive operating philosophy of “always do the right thing.”

By the way, all of those companies I can name that live by that adage are among the most successful and well regarded in the industry. Does always doing the right thing make a difference? The answer, of course, is it always comes back to you over and over again. I don’t know how I will ever repay Sperrazza for all he did for Ben and I, but if you happened to see the movie “Pay It Forward,” you have to know that somewhere, somehow there will be a big payback for him.

Ron Davis is a SSI Hall of Fame inductee and President of Davis Mergers and Acquisitions Group Inc. Also known as The Graybeards, the company is active in acquisitions and mergers exclusively in the alarm business.